Paranormal Activity, or An Epic Analogy of All Male Female Relationships. 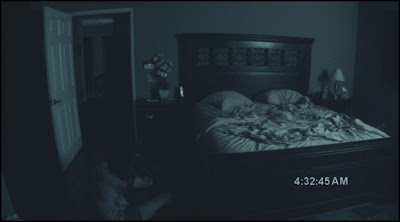 Honestly, Paranormal Activity is funnier than it is frightening, which works well to relieve tension, and to keep the film interesting during the scenes that aren't meant to scare the audience. The scares it does deliver, however, are mostly genuine; you aren't going to be forced to leap from your seat because of some cheap jump cut spliced together with a loud noise. The parts meant to disturb you are due to the film's images, not its editing techniques.

But all in all, it's not really going to be that frightening unless you're one of those people who goes into the theater knowing that you're going to be terrified for the rest of the night. Those of you who dare the film to scare you will grunt and shrug: "That wasn't scary, bro. I'm from Detroit." You know who you are.

You're not going to scream and pee your pants, but Paranormal Activity is still worth your time. It's engaging and suspenseful and definitely worth sticking around for the big finish at the end.


But that's not a letter to the filmmaker! I broke my own format! Formats are meant to be broken, children. Instead I decided to write a letter to the main character, Micah. After all, he is the cinematographer for most of the thing, right? Spoilers follow the cut, but let's be honest: Spoilers rarely ever spoil anything. You all will figure out what's going to happen before it happens anyway.

When your girlfriend tells you one day that she has been haunted by something since she was a little girl, you should dump her. Odds are that she's not really haunted, and this is your first sign that she's crazy. Okay, in your case, she actually had something haunting her, but is that really a better alternative? It can't turn out well either way.

But your story offers a striking tale of warning to anyone who decides to persue a relationship: Don't. It's a simple analogy. Boy and Girl fall in love and everything is dandy. Suddenly, a problem arises. Boy wants to solve the problem by filming it and picking it apart, but Girl just wants to ignore it in hopes that it will go away. But inevitably, they start trying to fix their problem; kill their demons if you will. This, of course, makes things worse and things spin wilder and wilder out of control until Girl turns into a demon and kills Boy.

Sigh...they all end the same.

Email ThisBlogThis!Share to TwitterShare to FacebookShare to Pinterest
Labels: demons, good horror movie, handheld, inevitable death of your relationship, peeing your pants, sleep with your door closed for heaven's sake, worth seeing