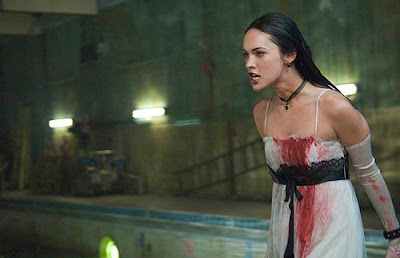 You seriously have an Oscar? I mean, I had my issues with Juno (most of which can be summed up by the abridged version of the script), but it was still entertaining. Yet, when the trailer for Juno 2: Jennifer's Body was released, I knew I was in for 2 hours of torture (and not the good kind that horror movies tend to include). In the back of my mind, I thought it could be mildly amusing but obviously I gave you too much credit.

Five minutes into Jennifer's Body the person next to me leaned over and said, "I hate this movie." Something about a bunch of kids walking around saying stupid words you've designed to sound hip just doesn't fly anymore. Your teenage girl language passed in Juno because it was the entire theme of the movie and it was actually funny. In Jennifer's Body, your writing reminds me of the retarded kid on the football team; it's trying so hard to do well, but it is fundamentally incapable of generating anything but a few chuckles, which the audience immediately feels guilty for emitting.

I have this picture in my head of your writing process; let me know if I have it right: You sit at your typewriter (because you're obviously too pretentious for computers), and outline the plot for whatever quirky movie you're writing. Next, you go back through and look for opportunities to insert dialogue that is so painfully quirky and hip that it sticks out like an awkward boner (except awkward boners are usually funny). Finally, you throw in a couple of puns and the absolute worst plot tie-ins of all time and you send your script off with a note attached: "Hey, I'm Diablo Cody. I have tattoos and used to be a stripper. This script is obviously offbeat, quirky and hip because I wear leopard-print clothing." Works every time.

For a horror movie, the basic premise of Jennifer's Body isn't that bad. Girl likes indie band fronted by Adam Brody. Adam Brody sacrifices girl to Satan. Girl becomes infused with a demon and has to feed on human flesh to survive. Whatever. It's a horror movie, I don't care. But your inciting incident is a fire that starts for no apparent reason. Hey, it's a good thing all the important characters were essentially the only people to survive the fire that started without any explanation! Wait, was the band like, so "salty" that their music started the fire? Stupidest damn fire I've ever seen. What astonishes me is that you actually managed to explain most of the weird stuff that happened in the film (sometimes well, sometimes poorly), yet the event most important to the plot is the most mysterious thing in the entire movie.

You explained Jennifer's affliction well. You explained why that stupid band got famous. But the never ending hole to nowhere? You just thought that was a cool idea, right? You don't think that if scientists were trying to figure out where it led, they would maybe put, I don't know, tracking devices in there? Maybe the mystery was better than the truth (it certainly would have been to the audience), and the didn't want to discover that it led to some stupid stream by the mental hospital. Also, most people won't complain, but what's with the random lesbian moment? Wait, I can answer that. You figured the only way to get people into the theater was to put Megan Fox in some sexy little boy shorts and have her kiss a girl. Some of us are above the age of fifteen. Besides, girls are gross. Five minutes of Sexploitation just detracts from the plot. And don't even try to argue it's a throwback to some other horror movie. You are not Quentin Tarantino.

There were some good moments. Thank God for Adam Brody and J.K. Simmons. The sacrifice scene was done so well that I thought I was watching a different movie. Of course, spontaneously bursting into song always has been my thing. And it's only worth mentioning because you tried so hard, but there were occasional one liners that were genuinely funny. "Haha box cutter," I thought then resumed frowning. But most of the dialogue blew, your characters swear way too much (it's not funny, it's cheap), and most of Jennifer's Body simply annoyed the piss out of me. Especially Megan Fox. She couldn't act her way out of a box made by a mime and she has gigantic thumbs. That's right Megan Fox; you have giant thumbs and I hope you never forget it.

Anyways, Brook...I mean Diablo (good pen name. It's much quirkier and it's the shizz). Do us all a favor and go back to stripping. Wait, I just google imaged you. Just retire. And maybe hook Megan Fox up with your old contacts at the Vu.

Posted by Dear Filmmaker at 9:31 PM