Inglourious Basterds, or Tarantino's Ego 2: I Know A Lot About Nazis. 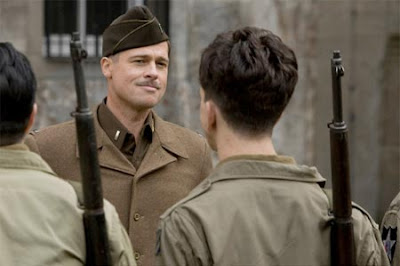 Do you think you're audience is stupid? Wait, I suppose you're right; most of your audience is probably stupid. But plenty of us are not, and your inability to let any subtle point stay subtle in Inglourious Basterds was borderline insulting to me. You point arrows to notable Germans to alert us to their importance. You find it necessary to spontaneously insert a split-second sex scene to provide background information that could have easily been inferred. And finally (for the purpose of this letter I won't list everything), you have Samuel L. Jackson explain to us why film burns. Of course film burns. I get the feeling that you simply wanted to point out your epic, unrivaled knowledge of cinema history...which you do constantly.

You are the worst name-dropper of all time. Over and over again, you have your characters tell us about German cinema in speeches that are sometimes so long that all I saw was you fellating yourself onscreen. "Oh...my... God! Quentin you are so knowledgeable!" It's the same thing you did with grindhouse films in Deathproof: Blatant after blatant reference like you're trying to impress a professor or something. It's unnecessary and pretentious. Just stick to subtle references, those don't make me want to hit you.

Now, Inglourious Basterds isnt a bad film, no matter how much the misspelling of the title makes me want to say it is. It is entertaining and at times, fantastic. But your lack of any emotional levity is simply tiresome. Everything is a joke, and the problem is that you've given us the same jokes repeatedly four films in a row. Okay, I'm sure many people find your little idiosyncrasies hilarious, but your capacity to completely ruin scenes with cheap jokes or stupid camera work astonishes me. IF I WANTED TO WATCH A B-MOVIE I'D WATCH A B-MOVIE! Grow up and make something worthy of the budget you are given.

For example, your opening scene: Jews under the floor boards. The excellent (he really was excellent) Christoph Waltz slowly berating the dairy farmer for information he already knows. It was a great start. Then Christoph Waltz pulls out the biggest pipe I have ever seen. The theater laughs, I groan, and the scene is ruined. Why can't you take anything seriously? Why can't a girl sit nervously in a room with the man who killed her entire family without you focusing the camera on strudel? I hate strudel! Strudel ruins scenes Tarantino. Your new nickname is "Strudel."

Your characters are nothing but stock caricatures of whatever you need them to be and none of them have more depth than a glass of water. The most diverse character in the entire film is the dairy farmer in the beginning and he's in the film for ten minutes. It is pathetic, easy filmmaking.

You did save the day with the fantastic scene in the basement bar. If this scene didn't exist, I wouldn't have thought twice about giving your film a 1/10 on IMDB (the worst insult, like, ever!) Holy Hell, this scene was fantastic! You capitalized perfectly on your "knowledge" (someone probably told you) of culture and of the various accents in your film. You did manage to throw in your interpretation of "King Kong" in there, but it was semi-plot relevant so I forgive you.

A lot of other people might be pissed at you too. I think most people are expecting an action film. I hate mindless action, but that's what you're good at! You're like Michael Bay with dialogue other than grunting. Unfortunately, the Basterds appearances are so rare that I occasionally forgot why the movie was named after them. . Much of the film moves at a slower pace than I expected, and it actually drags in spots. Now Im not saying its boring (occasionally its boring), but someone needs to get some balls and tell you to stop it with the drawn out speeches and scenarios. In a perfect world, you would have made this movie: 2 hours of Brad Pitt and friends killing people; of course taunting and giving their little speeches along the way. It would have been more fun that way. Then, you give the other half of the script (Shosanna s story) to a writer/director who has the capacity to produce substance and you have two good movies! What you have here is much more of a wishy washy, I enjoyed it--but there were some terrible problems-- sort of meh, it was good, but not amazing film. I wanted more. C'mon, Tarantino. It's time for something new.
Posted by Dear Filmmaker at 10:32 PM 4 comments: 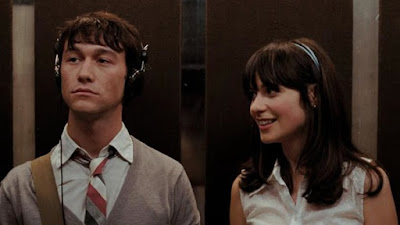 Are you over her yet?

You've managed to do what every dumped male writer has dreamed of doing: You've written the story of the crazy bitch who broke your heart... and published it! Now everyone will know how cold-hearted and evil she truly is! I can hear your deep bellowing laughs of justice now.

Unfortunately, it's quite obvious that you never took the time to fully understand Summer's real-life counterpart, because the film never develops her character beyond the empty shell-of-a-human-being she obviously had to be to dump a catch like you. You appreciated her beauty, you liked the same things she liked, but you never got to know the girl the way you thought you did. Rookie mistake, buddy. And this is the major problem with your screenplay.

The story starts off strong: guy meets girl, decides she's the love of his life even though she has no idea yet, and attempts to impress her with his karaoke skills. Every epic love story starts this way, sometimes with minor changes, but the karaoke is always essential. So begins a barrage of cute scenes in which the main characters fall deeper and deeper into the treacherous fury of love. They play house in IKEA, tell each other pseudo-important tales of their hopes and dreams, and at one point Tom even prances happily through the streets accompanied by an animated bird (Did this happen in real life too, or did you make it up?). These scenes worked well; props to you! Everyone likes funny and adorable, even bitter, self-important film enthusiasts like myself.

Then, without warning (aside from the post-modern time jumping that has already alluded to this event), Summer dumps you. I'm just going to refer to the main character as "you" from now on, since we all know who Tom really is. Maybe this is how it ended in real life --I suppose that's some kind of an excuse--but it does not work in the film.

You never show the conflict. Your relationship never deteriorates, it just suddenly ends. Even if you found no evidence of your relationship slipping away, there had to be something somewhere that made Summer think, "This just isn't working." And you needed to put that in the script. Maybe she was upset that you got in that bar fight (You macho man, you.), but that wasn't enough. She just disappears for a while leaving us to deal with your moping.

But hey, it's not all bad. Walking into the theater, I was all ready to hate 500 Days of Summer, and I like, totally didn't! I was so worried that this was going to be fantastically quirky and chock full of indie culture that after I saw the trailer, I immediately picked up my hamburger phone, dialed a friend and said, "This "Summer" movie looks like it's going to be totally hip and trendy!"

Thankfully, Summer didn't turn out to be an older, she-wolf version of Juno. The cultural references were relatively tame. Yeah, the Smith's played nonstop, but I didn't have a problem with it. The Bergman parody was even impressive until you showed the chess board, causing the seventeen-year-old film buffs behind me to point out the Seventh Seal reference to their girlfriends. I shook my head at them, but then was equally disappointed that the cliche of Death and chess boards still goes over some people's heads.

So Scott, despite my complaints, I think you turned out something that's definitely worth seeing. It may not be the greatest movie of the Summer ( points for the pun?), but it is certainly a whole lot better than the last screenplay I wrote after being dumped; which was essentially 90 pages of binge drinking and chain smoking loosely tied around a narrative of woman-hating.

This is slightly more mature than that.

P.S. I can't decide if the "Autumn" joke was funny or pathetic. I'll let it slide.

Posted by Dear Filmmaker at 5:41 PM No comments:

In Regards to "Funny People." 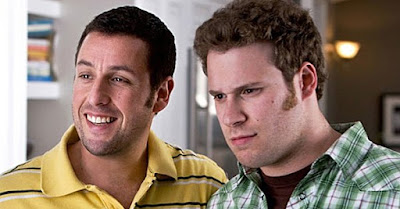 If you ever attempt to write another film that is both funny and dramatic, my only request is that you don't fill it with penis jokes. Now, Ive enjoyed a good penis joke in my day. In fact, I enjoyed some of the penis jokes in Funny People. I did not, however, enjoy the fact that the entire movie felt like a never ending string of unfunny penis jokes. Its a crutch, Apatow. What were you thinking? Be creative. Write more original content! There was some here, but it was lost in a sea of cock and balls.

More importantly, take a class on narrative structure. Or have someone who knows something about it give you some pointers. You've somehow managed to take three perfectly fine script ideas and mash them together into one nonsensical film that has little to no regard for what has come before. Okay, so Adam Sandler is dying and he hires Seth Rogen to write some jokes for him. Perfectly fine setup. Its funny, I like it. Then you suddenly jump into a ridiculous montage of celebrity cameos that are amusing but completely irrelevant to the plot. The second act plays out like The Aristocrats: a collection of comics telling different jokes about the same thing, dropping the narrative almost entirely for a solid thirty minutes. Then, just as we think Adam Sandler is finally coming to his senses and becoming a better person...

YOU FUCKING CURE HIM? FUCK YOU!

You fucking cure him and you send him on a comic jaunt to his ex-wife's house, where of course her ridiculous Australian husband shows up and hilarity (a term use I use loosely and, in fact, sarcastically) ensues. The third act shows complete disregard for any dramatic standard you had set up, and comicly? It made me miss the penis jokes. What you've somehow done, is given us a portrait of a dying, lonely man finding redemption and then realizing hes too good for redemption, because hes seen Cats on Broadway.

You didn't have the balls to kill Adam Sandler and you couldn't muster up the maturity to write a script with any depth or originality. If you had, you could have made this mess of a film something worth watching.
Posted by Dear Filmmaker at 5:30 PM 1 comment: