Please stop making fictional films and advertising them as based on real events. I understand that if people think something is based on a true story--especially one involving aliens or ghosts--they are more likely to see it, but you're constructing a false reality that gullible human beings are going to accept as fact. It's not this film in particular that worries me, but I'm starting to wonder where you're going to draw the line. You have the money and the influence to completely rewrite history, and a large majority of Americans are too dumb to even consider you might be lying to them.

Now, I realize I just described the government, but c'mon! You're better than them, aren't you? You're just a couple of guys looking to make a quick buck. Wait...are you the government?

But anyway, The Fourth Kind was hyped pretty well. People thought it was real; a lot still do. A quick google search will debunk that claim. If Dr. Abigail Tyler actually exists, she needs to show up on a talk show and show us some ID.

I do like the marketing campaign, and the hype surrounding the film; but it would have been nice to have some honesty--maybe after the credits? I'm not that big of a fan of after-the-credits content, but I like to imagine Ashton Kutcher showing up after the film and letting everyone know that they got Punk'd.

Anyways, forget marketing. Forget the lying scum that is Hollywood. Forget what happened that weekend your uncle babysat you...

The Fourth Kind was entertaining. Granted, I just saw The Box so I probably would have thought I Know Who Killed Me was entertaining too; but The Fourth Kind kept me intrigued. It certainly had its problems: The sheriff character was absolutely ridiculous, the broken fourth wall was a contrived cheap shot, and the dialogue was nothing to be proud of. However, the combination of "archive" footage and dramatization intertwined nicely to create a pseudo-documentary atmosphere that kept the film at a nice pace. I think enjoyment of the film hinges on whether you approve or disapprove of this stylistic choice.

This film will likely be panned by many for the wholehearted assertion that it is based on true events, when it is in fact complete fiction. But if one were to assess the film on its own merits, I can't see any reason to drastically raise or lower it above or below any other film of its kind. Due to the timeliness of its release, it will likely be compared to Paranormal Activity which everyone (except my sister apparently) knew was fake from the get-go. The "documentary" footage of Paranormal Activity was still unsettling to many, so there's no real reason to discredit The Fourth Kind just because it's claim of a realistic portrayal is a hoax.

Anyway, I was entertained. I don't really care about this one. Say what you want, masses. The only real purposes of this film are to entertain and to stimulate the viewer's thoughts on whether aliens exist or not. It's not that stimulating. Especially without Milla Jovovich's industry standard full frontal shot.

P.S. Maybe we should question Roman Polanski on the whereabouts of Tyler's daughter.

P.P.S. Yes, I used both the "forgettable" and "worth seeing" tags. Aren't most movies both those things?

Posted by Dear Filmmaker at 1:58 AM No comments:

The Box, or Surprise! No time travel! 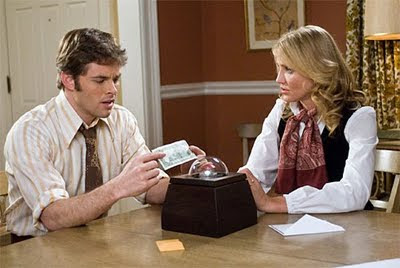 I cannot believe it. You made a movie without bringing up time travel. But after seeing The Box, and wishing Cameron Diaz had been locked in one, I really wish I could go back in time two hours and kill my past self before he had to watch it. Actually, I wouldn't because I'm a pimp. And pimps don't kill themselves.

Damn, Southland Tales was good! But, Richard... The Box was most certainly not. I mean, it was funny for the first forty-five minutes or so. Every time Cameron Diaz mysteriously lost her accent, I smiled. Every time a random character stared sadistically at James Marsden for no real reason, I chuckled. But when the film brought the big guns and let James Marsden's mind wander towards philosophy, there were tears streaming down my face due to my exorbitant laughter. This comic gem really knows how to get the laughs. Oh wait, all of that was unintentional. The audience was supposed to take this film seriously. I think that may be the best joke of all.

Here is some actual dialogue from the movie: (a rough, yet accurate, quotation)

But seriously, all screen directions aside, that is the actual dialogue. This is straight out of a Nicholas Sparks novel! After the couple pressed the button, they should have time-traveled forty years into the future where an elderly James Marsden reads the story of "The Box" to an elderly Cameron Diaz; in hopes that she would remember their time together... even if just for a moment...

Wipes tear from his eye. Wait, what are we talking about? Oh yeah, let's summarize The Box, Richard. Make sure I've got everything straight:

So there's this couple who, according to Cameron Diaz's accent, is sometimes Southern and sometimes not. They're in a hard spot financially, because James Marsden won't quit his dead end job at NASA and Cameron Diaz didn't win enough money in her lawsuit against the doctor who X-rayed her toes off. As a result, they only have one convertible, and they might have to--heaven forbid--take their son out of private school.

Then, Harvey Dent comes to their house with a proposition: Press this button and two things will happen. First, someone in the world, whom you don't know, will die. Second, I will give you one million dollars...tax free (take that, government!). Cameron Diaz then makes the obvious choice and presses the button. She gets a million dollars. Win.

But then, Harvey Dent starts following the couple around; seemingly because they are inquiring to others about his identity, but really because he was planning on doing so all along. Some people get nose bleeds, some other bullshit happens, and then James Marsden meets the man who last received the box. Turns out, this man has killed his wife in order to save his daughter. Wait, could this be a clue to what is going to happen at the end of the film?!?!?!?! Yes, that much punctuation was necessary. So, blah, blah, blah, it turns out that Harvey Dent was sent by God (or aliens, take your pick) to test the human race. Needless to say, we're failing miserably. James Marsden shoots Cameron Diaz (thank God) in order to save his son's sight and hearing. James Marsden goes to jail and Harvey Dent continues to be disgusted with humanity.

Now, Richard. Don't be offended, but the reason I refer to large portions of the plot as "bullshit" is that these scenes have no real bearing on the plot at all. You used the library scene because you wanted the film to be creepy, and also because if the film didn't have time travel, it at least needed portals. The kidnapping of the son is a tense moment, but also goes nowhere. Every time there is an opportunity for something interesting to happen, the characters black out and end up back at their house.

Let's not even talk about the movie for a moment. Let's talk about the box. Would you press the button? The obvious choice is "yes." First of all, in a logical world, if a dude showed up and told you that a simple box could kill someone, you'd laugh in his face. If he offered you a million dollars, you'd laugh in his face, press the button, and take his money. And if it turned out that it did actually kill someone, no all-knowing omnipotent being could really blame you for thinking it was a joke.

But let's say that you did believe that the box would kill someone. Two-face didn't tell you that you would actually cause the death. He just said that when you press the button someone would die. The world is a big place. I'm pretty sure that every time I touch anything someone in the world dies. So why shouldn't I get a million dollars for it?