Patrick Swayze: Off to Tame the Road House in the Sky. 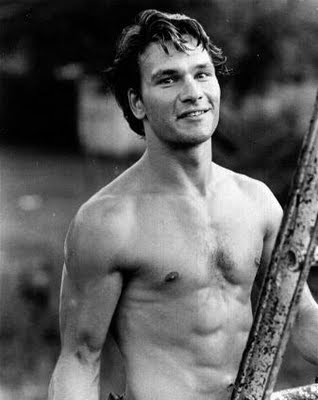 No matter what Kanye says, to me your death is the most upsetting of the year. You may not be as big a star as Michael Jackson, and of course your battle with cancer was well publicized so I knew the end was imminent, but you've given the world more than most celebrities ever will. Let's recognize your accomplishments.

-It was you who taught Ferris Bueller's sister to dance with passion. And I always believed you warned her never to get that nose job in the first place.
-It was you and Demi Moore who somehow made pottery sexy. Wait, pottery was always sexy. But you made it sexier; all the while prepping Whoopi Goldberg to win an Oscar. We all know who that Oscar really belongs to, Swayze.
-It was you who taught Keanu Reeves that when the man you're after turns out to be your friend, the only acceptable solution is to yell and shoot into the air.
-Seriously, Whoopi Goldberg won an Oscar.
-It was you who taught me that I am simply a product of fear. And that I had so much more gusta that I could musta.
-You played the best Pecos Bill I've ever seen, and you ripped out a man's throat. In one career.

Seriously, Swayze. You've graced us with some classics. Michael Jackson may have written some songs or whatever, but who really listens to Michael Jackson? You were in Road House. Was Michael Jackson in Roadhouse? No, he was in Miss Castaway, which...No, wait a minute. I'd probably watch that. But that's not the point, Patrick! The point is: ROAD HOUSE! It's Dawson Leery's favorite movie! That's how you know it's good. David Carradine died this year as well, but most people only know him as that guy from Kill Bill anyway. I love David Carradine, but Patrick...you mean so much more. By the way, David Carradine wanted to be at your funeral, but obviously he couldn't make it. It's too bad. He was really dying to come.

I know not everyone is as big a Swayze fan as I am. And I know a lot of people find my David Carradine joke distasteful. (Chill out, people.) But in all seriousness--and I know there was a lot of fake seriousness earlier--it really was disappointing to hear that you passed. I think I always thought of you as immortal, untouchable. As if you didn't really have cancer, but cancer had Patrick Swayze. In the end it got you, and that makes me sad. But I know you're up there, smiling down on us, just daring Keanu to try and shoot you now.

P.S. Now who am I going to confuse with Kurt Russel?

Posted by Dear Filmmaker at 4:59 AM

Email ThisBlogThis!Share to TwitterShare to FacebookShare to Pinterest
Labels: dead, Patrick Swayze, roadhouse, seriously did you see those abs?, sex and pottery, thought he'd be bigger