Invention of Lying, or If You Didn't Find It Funny You Should Stop Reading This Blog. 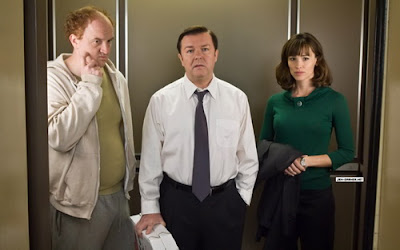 Let me start by saying that I'm fairly upset that I don't have any angry letters to write this weekend. Well, so far; I haven't seen Whip It. I have high hopes that it's terrible. But between Zombieland and The Invention Of Lying, I have to say I'm quite pleased. Unfortunately, due to the strength of this weekend, I'm worried that people are going to miss out one of the few original comedies in a long time.

Every once in a while, someone writes a comedy that is actually unique (Pleasantville, Adaptation, Enchanted) and The Invention of Lying certainly fits into that category. Alternate universes really are a nifty trick, and it's unfortunate that they're usually wasted on the fantasy genre. Lord of the Rings would have been much more interesting if all the characters constantly told the truth. Imagine...

Frodo: Gandelf, your size and your beard are intimidating.
Gandelf: I'm sick of bending over to look at you. You're so tiny and worthless.
Sam: Why are we going to Mordor, Frodo? Wouldn't you rather be in bed; gently caressing each other?

No, never mind. That's pretty much how it went anyway.

While the concept of Invention of Lying is original, it's also incredibly simple. By changing one aspect of the world, you've opened up unlimited opportunities for original comedy and social satire: The extra awkward first date; the coke-addict traffic cop; the most disgusting ice cream flavors you can think of; etc. etc. Honestly, the concept alone probably would have been enough to sustain a pretty decent comedy. But you take it a step further.

When Mark creates the concept of an afterlife (in a world without religion) to ease his dying mother's fears, the plot evolves into something far greater. The film becomes more than a simple gag, and as Mark's status as prophet continues to climb, the film's hilarity and social relevance follow suit. Initially, my reaction to this plot point (one of the main focuses of the film, actually) was to insinuate that the film was calling religion out as false. Thankfully, you flesh out the concept and manage to handle one of the touchiest topics possible with an impressive amount of respect.

The religion in the film is created to bring the people hope. It is not created out of hostility or for personal gain, but is inherently good; which reflects your intent to be more than a cheap crack at religion (if it was a cheap crack, you can tell me). Religion couldn't exist in the world of the film before Mark because it couldn't be proven. The film's universe has no capacity for abstraction, which is also highlighted by Anna's refusal to pursue a relationship with Mark. In Anna's mind, the rational reasons for marriage are to create offspring with desirable traits. Mark, being short and fat, lacks the physical features that would be genetically-inclined to create successful children. She likes him, but she has no means to weigh the value of her emotions, therefore she focuses on features linked to success.

Unfortunately, the setup of society's superficial tendency is one of the film's weaker points. Surely, Mark gets made fun of by many people, but the audience is never driven to believe that all people are treated a certain way based upon their looks. Then, suddenly towards the end, it is revealed that everyone hates fatties. Don't they have computer geeks who grow up to be millionaires in this world?

If the plot and romance had progressed more fluidly, I'd be comparing Invention of Lying to Groundhog Day right now. But you're severely outmatched in the romance department, because after all the amazing religious humor, Jennifer Garner really seemed like an afterthought. Your return to the romance narrative is actually one of the most awkward transitions in the film, maybe one of the most awkward transitions I've seen in a while. Had the romance and religion been entwined and contrasted better, Invention of Lying would be on its way to becoming a classic.

Instead it's just the funniest movie of the year, which is no small feat either. Well, actually...have there been any funny movies in 2009? There really have only been a couple, but don't let that take away from the fact that Invention of Lying is one of the funniest films I've seen in a long time.


P.S. Thank you for celebrity cameos.