Where the Sleeping Theatre Goers Are, or Spike Jonze's New Music Video. 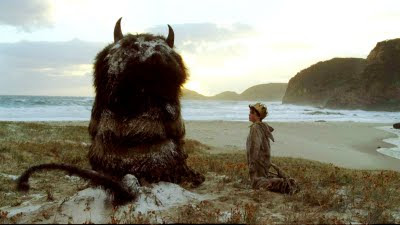 If I wanted to watch eight children argue, I would take up babysitting. Where the Wild Things Are will forever be my ultimate reminder why I do not.

Certainly you've captured the elaborate capacity of childhood imagination and accompanied it with a phenomenal soundtrack, but that, sadly, is about all the film has going for it. Perhaps you should have made a music video instead. Any relevant or entertaining content is so thinly disbursed between random fits of brattiness and fort building/dirt throwing/pile making/[insert random childhood action here], that I would classify Wild Things (Not to be confused with the Neve Campbell film) as surrealism if the events had any driving force behind them whatsoever. But nope; It's just some kids playing. Oh, and some of them happen to be giant furry things.

At least the climactic metaphor (Max's "birth" from KW) actually made sense and gave the film some semblance of closure, but every other action Max and the nonhuman characters partake in seems like an exercise in time wasting. Thank the heavens this was just over an hour and a half; any longer and I would have taken a nap. There's more indie music/random event combos in this than there were in Juno.

What bothers me the most is that the first fifteen minutes of Wild Things are great. Kid feels neglected, throws a hissy-fit and runs away: a fine articulation of childhood frustration. When Max arrives at the island, the frustration wanders off and is replaced with a mess of childhood imagination tied together by thinly veiled tidbits of Max's actual life. The problem with this, is that all the characters on the island are Max; in that they are figments of his imagination, and therefore cannot possess any capacity for thought or emotion beyond his own. As a result, all events on the island are shaped by a grade-school auteur, and the characters can do little more than behave like whiny children.

I held out with the hope that once Max returned home the film would dazzle me at the end (with at least a fuzzy moment to make me feel good), but no such luck. Max's final scene at home is shorter than the end credits. Apparently, when a child runs away he should be rewarded with cake.

P.S. KW is a total pothead.

Posted by Dear Filmmaker at 5:06 AM