Jennifer Aniston is a Whorable Boss. 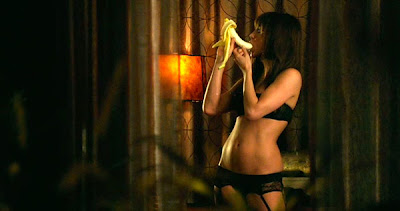 This image is likely all that anyone will remember of Horrible Bosses, regardless of whether they decided they liked the film or not.  Now I'm sure if you've seen it, you're all like, "Whoa, bro!  There was some funny stuff in that movie, dogg!"  But given a few years, this thesis will likely prove to be true.  Comedy doesn't seem to have any staying power these days, and as I rack my brain for memorable Hollywood moments in the past few years, I seem to be coming up short.  I had to have seen some comedies, right?

This is not to say that Horrible Bosses is bad, it's simply forgettable, which in my mind translates to "not very good," but I'm sure not everyone agrees with me.  If you're looking for a few decent laughs, go see Horrible Bosses.  If the post-Hangover Hollywood comedy is any indication, it's an acceptable offering to those with nothing better to do.

The premise is, of course, that three dudes have horrible bosses.  Logically, they decide to kill them.  The bosses (Kevin Spacey, Colin Farrell and Jennifer Aniston) are a lot of fun in their respective roles as the cartoonish fuhrers of the workplace.  In fact, a large chunk of Horrible Bosses allure rests in the employer-employee relationships.  Kevin Spacey ridicules and belittles Jason Bateman, Colin Farrel tells Jason Sudeikis to fire the fat people, and Jennifer Aniston relentlessly assaults Charlie Day with sexual advances.  These are the funny moments of Horrible Bosses.  Unfortunately, our employee-heroes are left to their own devices for much of the movie.
So Bateman, Sudeikis, and Day want to kill their bosses, so they go the the ghetto to find a black person who will do it for them.  Instead, they find Jamie Foxx, who's unfunny-joke-of-a-name is beaten over our heads every time he's onscreen.  Seriously, it's not funny.  Jamie Foxx serves no necessary purpose to the plot, other than the fact that he's Jamie Foxx and he stares at you while drinking from a straw.

So anyway, our disgruntled employees decide to do the killings themselves, and bumble around aimlessly, doing stupid things which result in minor laughs for most of the second act.  Sudeikis tries to bang chicks, Bateman deadpans, and Day squeaks out off-hand remarks while failing at everything he attempts to do.  Yeah, you've seen this before.  Some of it's funny, some of it's not.  Very little of it moves the plot forward.  Just shoot your bosses, for heaven's sake.
Anyway, whatever a normal person wouldn't do in an attempt to kill their bosses, these guys do.  Which really gets tiresome.  Thankfully, Kevin Spacey moves the plot along for us, our leading men commit more ludicrous acts, and eventually everyone walks out of the theater praising Horrible Bosses because they laughed twice.
Remember when comedies used the plot to facilitate the humor?  Lately, all I've seen is the separation of plot and comedy (Midnight in Paris being the lone exception).  Plot used to be the vehicle for good comedy, but it seems to becoming the backdrop.  I don't like it.
6/10
Posted by Dear Filmmaker at 5:14 AM