I cannot believe how awful Captain America is.  Normally, I say a bunch of hateful things about a film and then nonchalantly mention that it was decent.  Let me be clear: Captain America is awful.  I would use all caps to emphasize this, but I'm classy, dogg.

That's not to say it isn't watchable.  The first act is pretty solid, and while the rest of the film isn't horrible, it's so bland and lazy that it makes me want to watch Batman and Robin; which was a truly terrible film, but at least you didn't know exactly what horrible thing was going to happen next.  The truth is, after our asthmatic, anorexic underdog becomes Captain America, the film descends into montage after montage, some of which is actual montage, the rest of which is just bland action and meaningless dialogue that blurs together due to lazy writing and poor pacing.

The first act focuses on the digitally implanted head of Chris Evans, floating around on an anemic twelve-year-old's body.  Chris Evans' head really wants to join the Army, because Hitler's being a dick (he outlawed full-length mustaches or something) and Chris Evans' head really hates bullies.  He can't get into the Army because of his poor physical health, so instead he fights bullies in back allies, because getting his ass kicked constantly over trivial matters doesn't make him seem pathetic at all.
Anyway, Stanley Tucci shows up and pulls off the only believable German accent in the film, and then he's all like, "Hey Chris Evans' head, how'd you like to be on Chris Evans' body?"  Chris Evans' head likes this idea because he wants to kill some Nazis and so he changes his name to Bearjew he heads off for basic training.  There he runs into Tommy Lee Jones' who is still pissed off that he agreed to do Men In Black III.  In our first exciting montage, we see Evans' head and the twelve-year-old's body fail at every physical element of basic training.  But Evans' head can dismantle flagpoles and dive on grenades so he's selected to be made into a super soldier.
Head and body are finally reunited, and Howard Stark shows up, because he's Iron Man's dad and the audience is supposed to think, "Whoa, Iron Man's dad.  That's so cool."  The experiment is a success, and Chris Evans is ripped again, but then a German spy shoots Stanley Tucci and runs off with all the experimental serum, because when you hide a super secret lab in an antique store to conduct super secret military experiments, you invite people you don't know that well to watch.  Evans chases and apprehends the spy after leaping over a ten-foot fence, because he's The One, and can do anything he wants to do in The Matrix.
So, since the best actor in the film died, and they have no idea how to make more super soldiers (scientists don't write things down), they send Chris Evans to military training and he becomes an elite solder.  Oh wait, they don't do that.  They send him across the United States singing songs and acting in plays.  This is why we're in a debt crisis.  We spend all our money on super soldiers, and then let them join the entertainment industry.  You think Ryan Gosling became that beautiful without a special serum?  You're a fool.
And so, we get another montage.  Evans sings, he dances, he sells war bonds.  And thus ends the first act.  It's all downhill from here.
Meanwhile, Hugo Weaving has been being too busy being evil to perfect a German accent.  He steals the All-Spark (because every movie is a Transformers movie now), and assembles a team of Robocops to take over the world because Hitler is too chill for a superhero movie.  When Hugo takes a couple hundred American troops hostage--among them Chris Evans' best friend--Captain America finally gives up on media whoredom and singularly parachutes in to rescue them.

Using the extensive combat skills he amassed by being punched in the face repeatedly, Captain America infiltrates Agent Smith's compound and rescues the troops.  This scene mostly consists of Evans' skillfully camouflaging himself while wearing a bright blue suit and carrying a shiny red shield.  But there's also some slow-motion super jumping because the Matrix is all in your mind, and then Hugo Weaving shows up.  He mutters something in a cartoonish German accent and then rips off his face.  Apparently, the Nazis had the technology to make realistic human suits, because underneath the Hugo Weaving mask is nothing but a bright red skull.  Which is why his supervillian name is Red Skull.

Whether the carpet matches the drapes is, from this point on, the only perplexing mystery.  Red Skull is super evil so he wants to take over the world for no apparent reason, Captain America nonchalantly gets his best friend killed, and there's some feeble attempt at romance between Evans and the Army base tramp.  Inevitably, Captain America throws his shield at Red Skull (the audience is supposed to cheer) and then puts the All-Spark in Hugo's chest, because that's how all Transformers movies end.

But of course, Evans is on a bomb-loaded plane heading towards the USA.  The army base tramp tells him to steer it toward a landing zone, but he refuses.  He knows that if he safely lands the plane on a landing strip, it will explode; but if he crash lands it into ice, it totally wont explode.  So he crash lands it in ice, the plane doesn't explode, and we all know he freezes because we saw them digging him out at the beginning of the film.

When they finally revive him because they're ready to make The Avengers movie, he freaks out and runs into the street because he knows Samuel L. Jackson is lurking in the shadows nearby.  Sure enough, Samuel L. Jackson shows up and he's like, "Yo, dogg.  It's the future, mutherfucker!"  And Chris Evans mutters the most horrible closing line in cinematic history, which I will not quote here because I don't want to go back and foreshadow it in my synopsis.

Now that we have our totally gangsta synopsis out of the way, let's discuss.

I don't know how well that synopsis really illustrates that the middle portion of the film can be summarized simply with, "Some stuff happened."  Nothing memorable exists in the second act, and its only vaguely highlighted in the third by the inevitable climax.  It's as if the writers were given a month to write the first act, and a day to finish the rest of the script.  Captain America follows the same Marvel movie-making formula of its predecessors, it just lacks any sparks.  The dialogue gets so flat it might as well have been ad libbed.

This could have been forgiven had the film made any attempts to explain the origins of the Transformers-esque cube of power, or develop a character.  There are all these moments placed throughout Captain America where you'll inevitably think, "I'm supposed to like that," or "That's supposed to be sad," or "I think I'm supposed to cheer here."  These moments existed effectively in the other Marvel films (Tony Stark tossing aside a Captain America shield in his lab, for example).  Here, these moments are contrived and unearned.  When Captain America's friend dies, it doesn't matter.  He was just some dude to the audience.  The romance between Evans and Hayley Atwell (formerly mentioned as the Army base tramp) doesn't matter because she's hardly a character.  She's simply the only one on the army base with boobs and lipstick.  Red Skull is one dimensional as well: He's simply evil for evil's sake.  Maybe this worked in the forties.  It doesn't now.

Another problem comes from the character of Captain America in general.  A superhero needs a flaw.  Iron Man is a narcissist, Batman is tortured by the death of his parents, Spiderman is a pussy, and so on and so on.  Once Captain America is made into Captain America, he has no flaw (because he represents AMERICA!).  He is a goody two-shoes, hell bent on justice with super strength and an unwavering will.  He doesn't even have to deal with a secret identity like his goody two-shoes buddy, Superman.  The resulting feeling is, "Why should I care?"  As an Avenger, he might fit in.  On his own, he's still just patriotic propaganda.

5/10
By the way, I realized I gave in to the caps lock, so here's that Ryan Gosling photoshop as an apology. 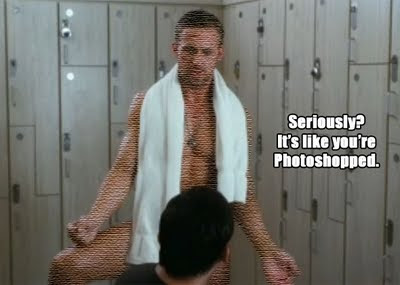 Posted by Dear Filmmaker at 9:32 AM

Email ThisBlogThis!Share to TwitterShare to FacebookShare to Pinterest
Labels: dudes frozen in ice, Hitler getting his ass kicked, seriously did you see those abs?, terrible movie