Harry Potter and the Death of Your Childhood. 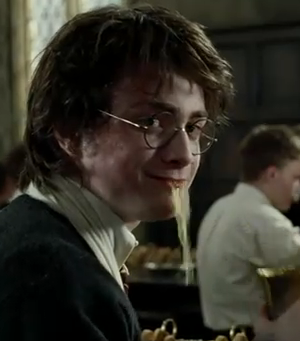 A review of Harry Potter and the Deathly Hallows: Part 2 is hardly necessary at this point.  If you've seen the other films in the franchise it is doubtful that you'd miss the conclusion, and it would be wholly idiotic to see the thing without first having made it through most of the others.  Although, if you were considering it, you should know that (thankfully) the filmmakers made no attempt to appeal to any newcomers.  Deathly Hallows: Part 2 picks up moments after part one left off, and has little time to spare for any off hand reminders of what has gone on before.

Whether or not this final installment is effective is debatable.  Its first act, in which Harry, Ron and Hermione invade the vaults of Gringott's, is by far the strongest; continuing the steady buildup of events--executed so well in Deathly Hallows: Part 1--necessary before facing the evil Voldemort.  But upon their return to Hogwarts, the film starts to feel like the earlier chapters:  too much plot crammed into too little time.


Harry Potter is truly a unique film franchise.  I'm not saying that the films in themselves are unique, but as a whole it's hard to think of anything quite similar.  What other multi-film franchise has taken the same adolescent characters and portrayed them onscreen for ten years?  Four different directors helmed this madness, and their roles are essential too, but viewers literally watched the actors grow from eleven-year-olds to twenty-one-year-olds (approximately).  I would argue that, traditionally, a character's entire adolescence is seen only in long-running television shows, and that the Harry Potter films reflect this, and that fans identify with it.

The first few Harry Potter films are, in my memory, childish.  Preteens certainly don't have much of an onscreen presence, and the idea of the children in Sorcerer's Stone (2001), or Chamber of Secrets (2002) facing the threat of death and surviving is quite honestly, laughable.  The fifteen-year-old me found Sorcerer's Stone an insult to the source material, and that's before I started hating everything.  I can't reflect on the quality of these narratives because I haven't seen the films in ten years, but I do not recall them in high regard.   Maybe I'll watch them all again and write a stunning academic paper.  Won't you all be impressed.

Whether it was the directorial change or the growth of the characters, the fourth movie (Goblet of Fire) proved to be the best in the series (at the time).  The actors finally started to appear somewhat grownup, and the film took a darker turn, both in film composition and plot (Someone dies, yo).  While still appealing to those desiring a fantastical introspective of the wonderful world of witchcraft, it also contributed a superbly-paced plot, and resulted in a more mature-feeling Harry Potter experience.

The sixth film, Half-blood Prince took the next thematical shift, even though it totally blew.  Harry Potter finally appeared somewhat adult; Dumbledore started preparing him for the inevitable confrontation of good vs. evil, and the film series continued with the dark tones established by the fourth installment.  The movie still sucked though, because it was essentially the Gossip Girl of Harry Potter films.  If you live in a hole, that means that everyone was totally hooking up and the plot was an afterthought.

Which brings us to Deathly Hallows: Part 1, which was by far the best Harry Potter film.  The characters are fully-formed young adults, who actually seem believably competent in their attempts to save the wizarding world from Voldemort.  No longer hindered by forcing an entire school year into a two hour film, the filmmakers began an acutely executed, steady buildup towards the conclusion of the series.

Which is where we left off.  Deathly Hallows: Part 2 begins as a continuation of Part 1, but quickly descends into a rushed series of conclusions that detract from its appeal.  Certainly, there are moments when Harry Potter fans will feel a rush of excitement:  Harry bursting in on the common room meeting, Professor Mconagall's initiation of Hogwart's defenses, Neville Longbottom being totally ripped, etc.  But these grand summations are fleeting moments of glee, and it is easy to forget the relevance of many events in the fast-paced back end of Part 2, the climax of which is a fairly unimpressive duel between Harry and Voldemort.  And then the film ends.  And then it ends again.  Oh, and then there's the flash forward, and the film finally ends.

In defense of Part 2, it is my belief that Deathly Hollows is the weakest of the seven books, since it too felt fairly anti-climactic and rushed.  However, Potter fans will no doubt be accepting of the final installment of the film franchise (there were certainly enough claps in the theater), regardless of its flaws, and it is still one of the best entries in the series.  Those of us who had hoped for more will no doubt be forgotten amongst the flood of critical and fanboy praise, but it really is too bad that Part 2 couldn't live up to Part 1.


I did wonder for a moment what it would have been like to be ten instead of fifteen when the first movie came out.  I certainly wouldn't like the films as much as this girl, but I can understand how people feel they developed along with the characters.  Although saying it out loud makes you a huge fag.

I am now drunk and using too many parentheticals.  Good night.