Sherlock Holmes and the Mystery of the Recycled Piece of Cinema. 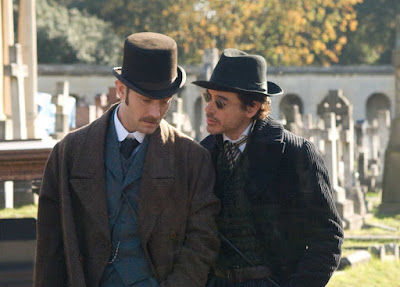 Tony Stark goes back in time to flirt with Jude Law and kill zombies.

I thought your endless string of crap was over. I thought you had redeemed yourself for the train wreck that was Revolver. That maybe you had finally made a movie that wasn't a complete piece of trash.

You failed. Not that Sherlock Holmes deserves to be thrown out entirely, but you made the most promising trailer of the year out of a film that is essentially a well-polished piece of trash that we've all seen a thousand times. Don't get me wrong; I expected some recycling. But the dialogue is cliched and tired, the plot is tedious, and I half expected Robert Downey Jr. to put on a metallic suit and fly to Iraq. We might as well just accept that Tony Stark was Sherlock Holmes in a previous life. Robert Downey Jr.'s "unique spin" on Sherlock Holmes is certainly unique to the character, but it's not a unique character; we all saw Iron Man last year and it was a hell of a lot better than Sherlock Holmes.


I could forgive the recycled character. For the first ten minutes of the film, Holmes and Watson had a verbal battle going that made everything just fine. Holmes' man-crush on Watson and his bitter distaste over losing him to a woman, of all things, got the film off to a nice start. Sherlock's well thought out fighting techniques were a charming quirk as well. Then the inciting incident shows up and anything recognizable as quality is thrown out the window and traded in for CGI explosions and insignificant plot devices.

Lord Blackwood has risen from the grave! He must have used magic because he's evil! Then Rachel McAdams shows up, in the worst performance by a usually decent actress since Star Wars Episode Two, even though her character is absolutely useless to the narrative. Her only real purpose seems to be an excuse to handcuff Robert Downey Jr. naked to a bed, in a scene that obviously exists only because it would be funny in the trailer.

So, the basic plot progression is this:

1. Someone dies.
2. Sherlock Holmes visits the site of their murder.
3. He mumbles a bunch of BS and looks around imagining what went on there.
4. He picks up something seemingly insignificant that will obviously be important later.
5. Repeat steps 1-4 three to four times.
6. Sherlock Holmes reveals to the viewer what has happened, even though we've already figured it out because the screenwriter is an idiot. Or the director. Or both. That's really the biggest mystery in the whole film: Who can I blame this on?

I blamed it on you, Mr. Ritchie, because I know who you are. But I noticed that one of the film's two credited writers, Anthony Peckham, also adapted Invictus for the screen. That, of course, was another piece of recycled garbage, so it's probably his fault too.

But back to you, Guy. By the way, could you forward that little tidbit to Mr. Peckham? Thanks. I specify "final cut" to Mr. Peckham, because for all I know, this could have been a perfectly fine script that you destroyed after going out to dinner with Michael Bay one evening. Sherlock Holmes has some slow-motion, then some fast-motion, then a computer generated ship gets thrust prematurely into the waters of CGI London and slowly sinks. I bet that scene cost a lot, eh?

But there was a plot in there somewhere that we were talking about, right? Not that it really matters. There's some secret society that does magic and probably protects the last living relative of Christ or something like that; a bunch of old white dudes who pledge allegiance to the Dark Lord. At least Lord Blackwood didn't turn out to be an emotionally distraught, shirtless vampire. If he had called Holmes "Spider monkey" the film might have suddenly been worth it.

Oh and there's some other sinister bad guy lurking in the background. The discovery of what he's after is probably the most idiotic attempt at political commentary I've ever seen, and the film would have been better off without him and Rachel McAdams (who are inexplicably linked throughout the narrative, and equally as ineffective).

You know, I was going to ramble on about how ridiculous your "mystery" was, but people would probably disapprove of the spoilers. Then they'd see the movie and realize that I gave away nothing because every mystery in the film either gives itself away or is too insignificant to matter. But my biggest mystery related beef by far, Mr. Ritchie, was so infuriatingly obvious that I wanted to strangle whomever thought it was a good idea. Because I've read Romeo & Juliet, and the fact that you dare recycle one of the most well-known plot devices in literature, perfectly exemplifies how idiotic and trite Sherlock Holmes actually is.

P.S. Want to come over later so we can look ominously into a camera and warn the world about the dangers of science? My mom will make cookies...

Posted by Dear Filmmaker at 5:33 AM