A Necessary Interjection: If You Release Crap, at Least Make Original Crap. 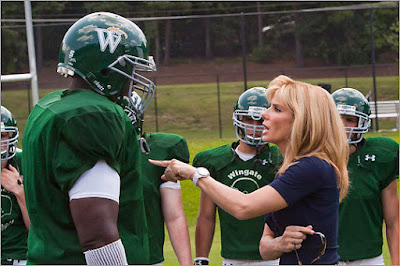 "If you don't protect that quarterback, you better start pushin' drugs, boy."

I haven't written any letters lately. I apologize. However, there has been an underwhelming amount of film that has required my attention lately. Now don't get me wrong. There have been some bad films released. Unfortunately, most of them were so obviously bad that I could in no way justify spending money just to infuriate myself. So, if you saw 2012, Precious, Old Dogs, Boondock Saints II, Twilight, or The Blind Side, it's your fault not mine; you should have known better. Let's face it, you've seen all these movies before in some form or another. I, for one, do not wish to pay money to see them again.


I'm not even going to hyperlink any of those movies either, because you already know about them, don't you?

I don't blame you too much if you liked Precious or The Blind Side. But I already know that pregnant teens with angry mothers have it rough and that the best way for a young black man to succeed is through sports and/or a rich white woman. If you need cliched inspiration in your theatrical experience, more power to you. I prefer films that validate my theory that women are evil.

I'm sorry for my terrible disinterest in the film industry this month, but after The Box it's hard to really hate anything else enough to truly complain. But like I said: I didn't see Old Dogs.

Here's some stuff I did see.

Props to Wes Anderson for finally making a movie that wasn't a rehash of Royal Tenenbaums. Fantastic Mr. Fox isn't going to shatter your world, but it's an amusing romp through the world of Wes Anderson (it's still incredibly Wes Anderson) in a new medium. Jason Schwartzman is easily the driving comedic force of this film, and while it's certainly not anywhere near Up's standards, Fantastic Mr. Fox will certainly keep you amused for an evening.

A well-made, but largely uninspiring tale about the end of the world and its few remaining citizens. It avoids the cliches of films like 2012 and Deep Impact, but save for a few flashbacks and some brilliant moments, it lacks the overarching emotional relevance it needed to have any real impact. It's basically about Viggo Mortenson's breakup with Charlize Theron. Unfortunately, he gets custody of the kid and has to drag him around and keep him safe from cannibals, blind old men, and rapists. At one point, Viggo pauses to play the piano, reminiscing about the good old days when he and Bella flew through the trees like spider monkeys. Wait, I think I'm getting movies confused.

This is the equation used to create the Road:

The equation also equals "42," but you probably won't get that joke.

This was actually one of the better films of 2009, and it could have been absolutely brilliant. It just never quite got there. It's largely founded on uncertainty (and the principle of uncertainty) and as a result, no one can ever really be certain as to what the filmmakers were attempting to do. Which is fine in my book. My interpretation of a film is largely more interesting than the filmmaker's anyway. Unfortunately in this case, the abstract nature of the film leaves the viewer relatively unsure of how far they should unpack the film's content, resulting in a film that if pointed a little further in one direction could have been absolutely brilliant.

If you haven't seen A Serious Man, you have absolutely no idea what I'm talking about. And if you have seen it, there's a good chance that you still have no idea what I'm talking about. This much is certain: A Serious Man is largely about one man's battle to find purpose and direction in a universe that is decidedly unpredictable and ludicrous. However, it also toys with the concept of reality, cause and effect, and probably more theoretical physics than I picked up on; ideas that never reach their full potential.

A comparable movie would be Synecdoche, New York; a film worthy of a hyperlink, in addition to be Charlie Kaufman's intensely thought-provoking (not to mention thought-rioting) directorial debut.


So there's a little summary to let you know I haven't disappeared. My only real goal at the moment is to finally watch The Hurt Locker so I can accurately form a list for best of the year.

Posted by Dear Filmmaker at 2:21 AM