Neighbors, or Seth Rogen Kind of Grows Up. 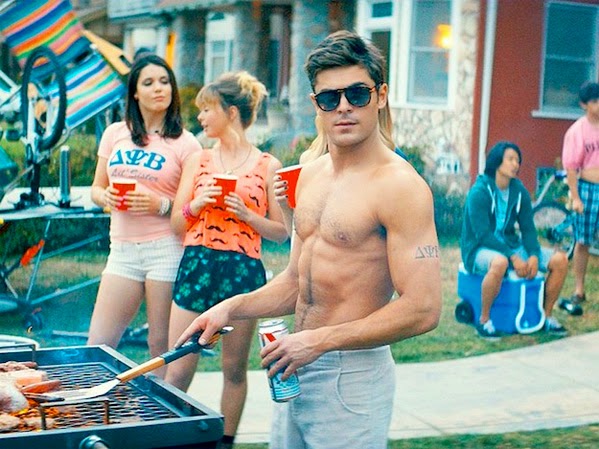 I no longer know how to write about comedies without being tempted to go on a long tirade about why there are so few great ones nowadays.  Maybe someday I'll provide you with that lecture, but for now let me try to focus on Neighbors, the latest entry in a long line of comedies that we can at least consider adequately amusing.

In Neighbors, Seth Rogen and Rose Byrne play a young couple with a cute baby who are trying to keep the youthful dream of having sex in the kitchen alive.  Unfortunately, they're now old and sleep deprived, so their efforts are typically stifled by their child, exhaustion, or Seth Rogen's declining sexual prowess.  When a fraternity moves into the house next door, Seth and Rose attempt to become fast friends with the fraternity leadership (Zac Efron and Dave Franco) in the hope that their friendship will convince their new neighbors to keep it down while they're trying to sleep.


On the first night, after lamenting over their lack of recent partying, Seth and Rose end up drinking at the fraternity house, bonding with their new neighbors and promising to let the brothers know—instead of the police—if they are being too loud.  The next night, when the party continues, the cops are called and the feud begins.

Cue a series of set pieces in which Seth and Rose lash out and the fraternity returns fire.  Some are funny, some are not, but many of them feel like a sidebar from the narrative.  There is a ten minute scene about breast milk, a seemingly unending supercut of Franco and Efron spit-balling different ways to say, "bros before hoes", and a particularly terrible scene involving a discarded condom.  These moments are sometimes funny, but exist in an entirely separate comedic universe of improvised one-liners, while Neighbors strongest comedy utilizes the film's larger narrative moments and themes.

Take, for example, another of director Nicholas Stollers' films, Forgetting Sarah Marshall, in which he managed to take a number of ludicrous caricatures and turn them into fully-formed characters while still providing an Apatow-approved amount of sex jokes.  The moments in Neighbors between both opposing couples—Efron and Franco being the other operative couple—in which they take the time to cleverly rehash their motivations, displays a narrative maturity and consistently provides some of the funniest moments in the film.  Neighbors is not a battle of "bad fraternity" versus "good family", it's a generational struggle between those about to enter adulthood and the adults who are hanging on to their last scrap of youth.  When this conflict is comedically dissected, Neighbors gets its best results.

You will laugh at Neighbors, regardless of it's flaws.  Whether you should make plans to see it now depends on your situation.  It's a good time if you're just looking for something to do, but it's probably not worth it if you have to find a babysitter first.