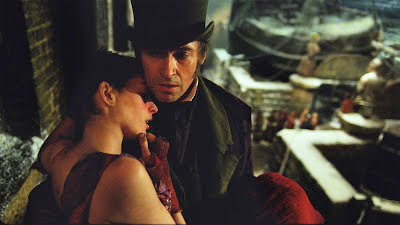 
Les Miserables is a grand attempt at a film composed entirely of song.  The characters sing even the simplest of phrases, which is almost always obnoxious and usually set to a reprise of one of the few songs that actually matter.  We spend a lot of the time listening to Hugh Jackman sing-speak something that's already inferred, and the content of his soliloquy is usually as dull as the tune.

And since it takes an hour for Hugh Jackman to sing that he has to go to the bathroom, other things get missed.  It's hard to care for characters that are only onscreen for a few minutes of a three hour movie.  I don't care if they die or if the boy they like doesn't like them back.  You should, for the most part, be able to take the music out of a musical and still have a valid film.  Such is not the case with Les Miserables.  Here is how it would have gone:

Hugh Jackman is in prison for stealing a loaf of bread.  He gets released and can't find work because he's marked as a dangerous man.  A priest takes pity on him and gives him a place to stay.  Hugh Jackman steals from the priest and gets caught.  The priest tells the police that he gave Hugh Jackman the stuff he stole.  Hugh Jackman decides to break parole and start a new life.  This segment actually worked except for the music being awful.

Hugh Jackman feels bad that Anne Hathaway has such a low-resistance to being a prostitute and decides to take care of her daughter.  But, before he does that, he makes sure to tell everyone that he broke his parole, because taking care of a little girl isn't very fun unless you're running from Russell Crowe.

Congratulations, you just saw the movie without the music.  Besides the mumble singing and the few actual musical numbers, the movie is just some stuff happening way too fast.  Musical numbers are supposed to amplify the emotion/plot, but in Les Miserables they replace it.  The film is three hours of actors stumbling about, singing bullshit, making big musical deals about insignificant things, and shrugging off the significant ones.  At least I've seen the non-musical Les Miserables, so I could pretend the characters mattered.

Just watch the trailer instead.  Or Pitch Perfect.