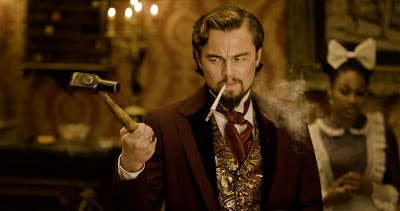 My biggest problem with Django Unchained is that it's not as good as Inglorious Basterds.  That's not a bad problem to have.  Thankfully, unlike Inglorious Basterds, Django doesn't have any moments that make me want to slap Quentin Tarantino in the face.

The film really shines in the first act.  Christoph Waltz purchases Django from some slavers and the two form a bounty-hunting partnership that results in some of the funnest movie moments of the year.  Christoph Waltz seems incapable of being outsmarted or killed, and claims each bounty with panache.  It is in these first scenes that we get the best of Tarantino's dialogue, humor, and cleverness.  Christoph Waltz talks himself out of every threatening experience, befuddling a US marshall, a southern plantation, and a group of Klansmen who can't seem to get their headwear in order.


But all good things must come to an end, and the plot must go on.  Django has got a lady that needs savin'.  My use of cliches aside, the good doesn't actually come to an end, rather the boil becomes a simmer.  Christoph Waltz and Django concoct a ludicrous plan to masquerade as slavers on the hunt for  an elite mandingo (a black slave who fights for sport) in order to win the attention of Leonardo DiCaprio, so that they can purchase Django's wife from him.

The dialogue is fun from here on out, though not as brilliant as some of the earlier scenes.  Leonardo DiCaprio is excellent as the diabolical plantation owner, and Samuel L. Jackson serves up some laughs as his head house slave.  Still, it drags in parts.  Since it's largely the same jokes on repeat after the first hour, it goes on far too long.

I'll save you the spoilers, but Django is a good time.  Tarantino got his award winners out of the way early, and seems content with offering over-the-top action and dialogue in a B-movie setting.  It certainly depicts the horrors of slavery, but it's not commenting or apologizing, so the sudden flourishes of unsettling cruelty seem misplaced.  Tarantino gets away with it because it's expected of him, and since not many directors have that luxury, the audience allows it.  Django killing some white folks seems to be the vindication of the racist violence, and for the mostly black showing I attended, it was enough.

Seriously, see this surrounded by black people.  There were multiple people in my theater yelling things like, "Kill that white devil!" the whole time.  And it was awesome.

That was probably racist, I apologize.