Our Idiot Brother, or A Bro and His Dog. 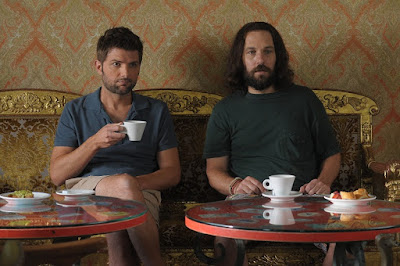 I don't know about you, but when I see that Paul Rudd has a new movie coming out, I immediately make associations to films like 40 Year Old Virgin, Knocked Up, Role Models, and I Love You, Man.  This certainly isn't a resume to be ashamed of, but these films--some of Rudd's most popular--will incite many viewers to expect Our Idiot Brother to fall into a genre it most certainly does not exist in.


Our Idiot Brother is not an ad-libbed buddy comedy.  If you're hoping for Seth Rogen to show up and tell Paul Rudd three different reasons why he's gay, you'll be sadly disappointed.  No, what we have here is more of a (500) Days of Summer, or a Little Miss Sunshine.  It's a family-centered (but not family-friendly) comedy attempting to swoon white people who use the term "dramedy."

And it works.  Our Idiot Brother is, by no means, anything special, but amidst a particularly dry summer offering, it dulls the hurt.

Paul Rudd plays the best possible version of everyone's least favorite person: the happy hippie.  He's so trusting of people's good intentions in fact, that he sells marijuana to a uniformed police officer who claims to be having a really bad day.  After he's released from jail, he discovers that his girlfriend--the worst possible version of everyone's least favorite person: the bitchy, passive-aggressive hippie--has a new boyfriend, is kicking Paul Rudd to the curb, and to make matters worse, is retaining custody of Paul Rudd's unfortunately named dog, Willie Nelson.

What's a Paul Rudd to do?  Go to the city and teach his family a lesson about life, that's what!

So that's what happens.  Rudd's siblings are the conventional faux-indie family: the uptight housewife with the dickish husband and wiser-than-he-should-be son; the bisexual adultress; and the career-driven writer who will do anything for success.  Whoop-de-doop!  I think we got a film on our hands!  Despite the healthy smattering of character cliches, the casting choices make everything okay, and the film delivers just enough laughs, and just enough snuggly, feel-good fuzzies, which is a term I learned in film theory class.

Paul Rudd, Zooey Deschanel, Elizabeth Banks, Steve Coogan, Adam Scott, Rashida Jones, and the promise of giggles should be enough to sway you to see this movie, but if you still need another reason, I can promise you a cute, groan-inducing finale that rivals Joseph Gordon-Levitt meating a girl named Autumn.

I was going to correct that to "meeting," but I like the current connotation.

Email ThisBlogThis!Share to TwitterShare to FacebookShare to Pinterest
Labels: forgettable but solid, smelly hippies., worth seeing