Hesher, or How I Learned to Stop Worrying and Walk with Grandma. 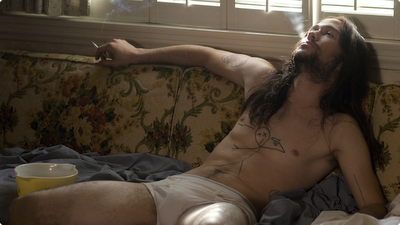 Hesher is a film that does not require me to write a letter.  If anything, I should be sending director Spencer Susser a thank you note.  Luckily, I don't live with my mother anymore so I don't have to send anyone a thank you note ever again.  Not everyone will love Hesher, and if you check out Rotten Tomatoes you'll find that some people even hated it, but that's okay.  We'll set their cars on fire later.

Hesher introduces us to a family lost in grief.  T.J., who is apparently in high school despite appearing to be about ten years old, has just lost his mother in a car accident.  His father spends his days lying on the couch, popping pills, and growing a beard to illustrate his grief.  His grandmother takes care of them both, despite being so elderly that she doesn't always seem to have a firm grasp on reality.

The titular character, played by Joseph Gordon-Levitt, drops into their lives with a literal bang; when a bout of frustration causes T.J. to break a window at a construction site, which inadvertently alerts a security guard to the location in which Hesher is squatting.  "You just fucked me," he says passively to T.J. before lighting a homemade explosive and throwing it out a window.
At first, Hesher seems to be a figment of T.J.'s imagination, appearing at T.J.'s school to smoke cigarettes in the hallways, and throwing rocks at him through the window of his classroom.  Thankfully, he's real (other characters interact with him), and he plants himself in the middle of T.J.'s family unit, moving into the garage despite T.J.'s protests.
What makes Hesher great, is that he never falls victim to a character arc.  He is and always will be: simply Hesher.  His motivations and background are never revealed, his penchant for fire-starting is never explained, and though his graphic stories of violence and sex are twisted metaphors, he doesn't claim to understand them.  T.J.'s family does become a sort of anchor for Hesher's madness, but it only accentuates Hesher's wildness, never decreases it.
Like Hesher himself, the film weaves off the traditional path.  It's certainly linear, and there are small points of narrative evolution, but mostly, its just Hesher; and Hesher's actions aren't always there to contribute, sometimes he just disrupts.  But he is the disruption that the characters needed, and he ultimately leads the film to a decisive end.
Hesher, in my mind, draws a lot of comparisons to Visitor Q, another film in which a seemingly untouchable stranger falls in with a family of misfits, prompting them to overcome their shortcomings.  Though Hesher (thankfully) lacks the grotesque nature that gives Miike's Visitor Q its cult following, the idea is the same; an unlikely hero providing the slap-in-the-face necessary to bring a family back together.
8/10
I should note that you should never watch Visitor Q unless you know what you're getting yourself into.

Posted by Dear Filmmaker at 9:25 PM

Email ThisBlogThis!Share to TwitterShare to FacebookShare to Pinterest
Labels: original concept, worth seeing