Your Highness, or The Longest Dick Joke Ever. 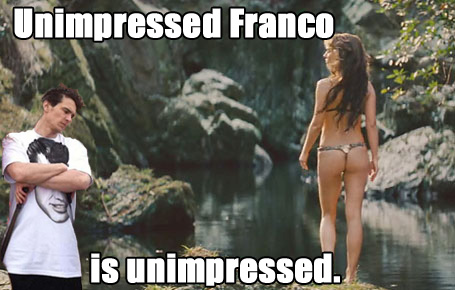 We all knew Your Highness was going to be bad, but the world runs on hope (and possibly James Franco), so I disregarded almost every review of the film in my quest for shameful giggles.  I got a few, but not nearly enough.  After the reasonably well-written first act, Your Highness descends into little more than dick jokes and action sequences; neither of which were very funny.

While the film attempts to spoof Medieval films, it plays out like a bad episode of Eastbound and Down.  Danny McBride's Thadeous is nothing more than a reprisal of EBaD's Kenny Powers with weaker one-liners.  The film may have been better if it had been a one shot of James Franco laughing for ninety minutes, because Franco's idiot grin was one of the only jokes that didn't get old.

Natalie Portman shows up around the film's halfway point simply so McBride has something to hit on, and because Natalie Portman is going through her Edward DeNiro phase, which means she'd probably star in your screenplay if you asked her.  The worst character, however, is Justin Theroux's Leezar who falls flat in almost every scene.  A virgin wizard who steals Franco's bride in order to gain ultimate power from a ritual known as "The Fuckening,"  Leezar's scenes are composed of little more than the pathetic rants of a teenage boy attempting to convince his peers that he's cool.  And while this characterization has led to humor in the past, Your Highness fails to use this character as anything more than an obnoxious plot device.

The film does illicit some laughs, but for every truly good joke there are several that fail.  Perhaps the most deserved chuckles come from creative plot elements, but they are few and far between and are small glimmers compared to the sea of penis jokes and homo-eroticism.