Daybreakers: Too Infuriating to Write About. 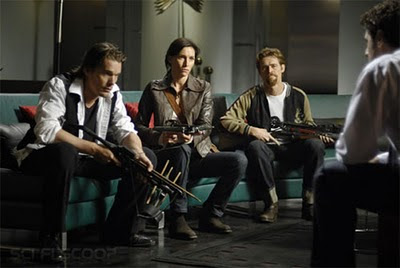 I understand that you probably aren't wearing Edward Cullen underpants right now. You probably don't have the Twilight shower curtain either. But you didn't have to prove it either. Now, you may not have made this film as an attack against Twilight, but your fans certainly see it as such. "Yeah man, vampires are cool again. They ain't whiny fags no more." Lines like this can be seen most places Daybreakers is mentioned on the internet. The comparison does not interest me.

Anyone with half a brain can see that the Twilight films are complete trash, but Daybreakers isn't much better; and it offends me that large amounts of people will praise your film simply because it "isn't Twilight." I'm actually upset that I'm even mentioning Twilight because even though it's a pop culture phenomenon, I don't care about it anymore. It sucked. Move on, people. But everyone is drawing comparisons between the two films, and I really wanted to link to that picture of the underpants. Enough about how Twilight sucks. Let's talk about why Daybreakers sucks. I hate that that's going to be taken as a pun.

Daybreakers is most upsetting because it's an interesting concept with a largely effective first act, and a really bad second and third act. The film opens with a scary bat and a loud noise which should have immediately lowered everyone's expectations, but then redeems itself with the opening scene in which a young vampire acts on her distaste for immortality. We're then introduced to the world of the film; underground tunnels for daytime travel, cars with heavily tinted windows, and large vampire corporations selling blood siphoned from the few remaining humans. There's even a vampire army designed to hunt humans. You set the stage for social satire well.

But then where did it go?

It's all suddenly replaces by a rollercoaster battle of good and evil complete with car chases, exploding vampires, and a slow motion vampire feeding frenzy. It turns into Zombieland without the self-awareness, which results in so many groan-producing scenes it gives Sherlock Holmes a run for its money. How many cheap twists can you throw into one movie? "Oh man, that's Sam Neill's daughter! Oh man, he's human! SCREECH!!! Scary bat flies across screen. DUDE THAT WAS SO SCARY!" I hate you. And how many times can a character come out of nowhere and save the other characters from certain doom? It happened at least three times in this film.

I no longer have any interest in writing this letter. I'm just angry. I don't know how to describe how silly this whole thing is. And for people who are entertained/surprised by cheap tactics, I don't want to ruin the film for them since that's what Daybreakers is based on.

I apologize for this terrible review of Daybreakers. To go further into detail about the horrible pacing, ludicrous plot holes, and one-dimensional characters will produce little more than bad grammar and misunderstood interjections. It was a ridiculous film. However, I will admit that once you accept it as ludicrous trash, it is actually entertaining in a strange way. A B-movie with an A-list budget, perhaps. I was not unhappy as I left the theater. My anger and disapproval has surfaced due to my hope that Daybreakers would be social satire instead of the standard Hollywood fare. It most certainly is the latter, and if that is your interest, I wouldn't attempt to sway you from seeing this film. Just don't expect much more than a forgettable gore-fest with unfulfilled potential.