The Place Beyond the Pines, or How to Ruin a Movie with Bradley Cooper. 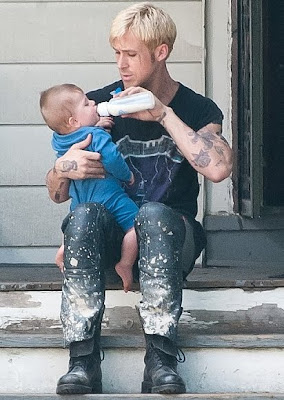 I think I see what happened here.  I'll bet you had this really great idea for a film, and the whole time you were writing it you were thinking, "Damn, this is good."  And you kept writing it, it kept being brilliant, and then you finished it and realized that it was only forty-five minutes long.

And in this instance, you blew it.  The first segment of The Place Beyond the Pines is fantastic and the rest of it is a sub-par addendum; devoid of any real emotional or thematic connection to its predecessor.

The film opens on a long tracking shot of Ryan Gosling, and everyone immediately thinks, "Oh, damn.  This movie is about to be as good as Blue Valentine."  And for the first forty-five minutes, it is as good.  Gosling is all swagger–as he should be, nearly always attached to either a motorcycle or a cigarette, and when he finds out he has a son, he goes to work (robbing banks, of course) in an attempt to provide for him.

The conflict here is that the mother of Ryan Gosling's child (Eva Mendez) already has a live-in boyfriend who's been taking care of her and the boy while Gosling has been traveling around the states with the circus. Understandably, he doesn't appreciate Baby Goose showing up and attempting to steal his family away.

So, Baby Goose is robbing banks, wooing Eva Mendez, and trying to establish a relationship with his son.  That seems like two hours of content to me.  I haven't even mentioned Gosling's incredibly amusing hillbilly friend yet.

But let's take a page from your book, Derek, and just start talking about Bradley Cooper.  Bradley Cooper is an injured-in-action, do-gooder cop, who stumbles into a plot of police corruption, which has absolutely nothing to do with Ryan Gosling or any of the the themes established by the first act of this movie.  It's jarring and confusing, and difficult to make sense of, mostly because it doesn't make any sense.  When you've become emotionally invested in a drama, you don't want it to suddenly transform into a Ray Liotta film.  And yes, Ray Liotta does show up.

Then it shifts gears again, focusing on a kid from The Jersey Shore who befriends the kid from Chronicle and they form a homo-erotic friendship based on drug use.  They both have issues with their fathers, which ties the film together plot-wise, but still flounders thematically.  A bunch of stupid stuff happens and we're all left wishing that Gosling would come back and make it all better.