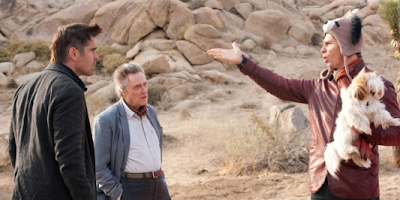 Good idea.  Colin Farrell, Sam Rockwell, Christopher Walken, Woody Harrelson, Tom Waits and a shih tzu?  I like where this is going.  It doesn't come off as well as I'd hoped; it's certainly no In Bruges (Good work, by the way).  However, the cast, and your talent for dialogue, is more than enough to turn out an entertaining couple of hours.

You've got a little too much going on in this one, and very little of it is essential.  The serial killer of serial killers, the Vietnamese revenge-seeker, and the murderer-stalking Quaker are all cute stories, but they feel like distractions.  Let's be honest, Tom Waits' screen swagger is the only thing that saves all three of these psychopaths from being laughable.  And not in the Christopher-Walken-trying-to-say-"hallucinogens" way.

Colin Farrell was the charm of In Bruges, but he's the essential bore in Seven Psychopaths.  He's writing a screenplay about psychopaths–which he wants to be about peace and love–and, understandably, he's having trouble.  Sam Rockwell, Farrell's dog-stealing best friend, tries his best to help; an exercise that eventually lands Farrell, Walken and Rockwell in hot water with a shih tzu loving mob boss.

There's plenty of jokes, plenty of guns, and it's all very funny, but it never fulfills the promise of being more than just a movie about crazy dudes shooting each other.  In Bruges managed to blend comedy while turning an entire city into a living purgatory.  Seven Psychopaths toys with the creative process much like Adaptation did (complete with a main character named after the author), but it only works in pieces.

I know you kids hate spoilers, so I'll leave it at that.  The simple truth is that, without quoting the movie to you, there's not that much to say.  Seven Psychopaths is a fun time, but by the end of it, the only thing there is to say is whichever Christopher Walken line you remember the best.

Posted by Dear Filmmaker at 6:53 PM