I just thought I'd pop in and note that while I haven't posted in a while, it is due to my focused effort to see every noteworthy film of 2011 before the Oscars.  I've considered articles on quite a few films this past month, but there always seems to be another film to watch.  You will, however, soon be treated to my annual summary, which will encompass most, if not all, of the films I've been scrambling to get through.  Thankfully, 2011 has provided a much greater supply of quality films than 2010, and I assure you the title of this year's entry will not be "This Year Sucked..." like last time.  In fact, let's take a moment to highlight some films that won't quite make the top ten. 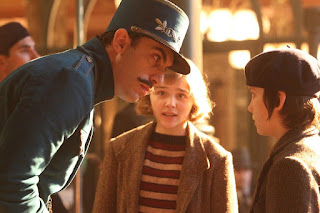 The film gods (No, not you Quentin.) may smite me over this one, but I'm having a hard time jumping on the Hugo bandwagon.  While it's certainly a good film, the story never really landed for me.  There's a poor boy in a train station getting chased around by Borat, while a veraciously literate girl spouts off about hanging out with an orphan is like an adventure.  Hugo should slapped her for having to much enthusiastic white girl kindness and bailed.  But of course, her godfather is Georges Melies, so he pretends to like her in order to hang with one of cinema's pioneers.  The film history lessons are by far the most enchanting (as the critics like to say), and by all means, Hugo is worth a viewing for these scenes alone.  However, the theme of a boy searching for answers from his dead father gets lost in the shuffle, and besides; Hugo's dad died in a wimpy ol' fire.  9/11 is much more of a tearjerker. 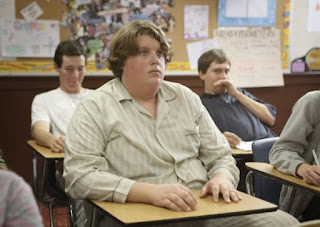 Poor Terri.  He's a fat kid.  I already feel sorry for him.  Unfortunately, he also wears pajamas everywhere, which is definitely a character flaw.  But Principal Fitzgerald (John C. Reilly), takes Terri under his wing.  Perhaps boosted by this friendship, Terri befriends a few of the other so called "monsters" at his school: a freakishly small troublemaker who habitually pulls out his hair and Heather, a formerly popular, recently shunned girl whom Terri takes an interest in.  Terri is a fine portrayal of an out of place teen trying to figure out how to exist in a selfish world.  It might have made my list last year but alas, the competition this year is a lot stiffer. 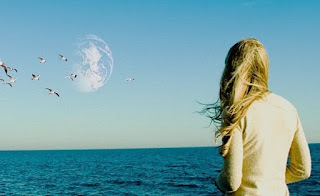 Another Earth does a fine job exploring the aftermath of a tragedy, in which a young woman attempts to make amends to the man whose life she destroyed.  Both of them have been forever changed by the accident, but their friendship starts to heal the wounds.  Meanwhile, another Earth has appeared in the sky; a beacon of hope for some, insurmountable worry for others.  Unfortunately, this part of the story doesn't function as well as it should.  Apart from one interesting television broadcast, most of the science fiction comes via voice over, which detaches itself from narrative instead of accentuating it like it should.  The only good thing that comes from the sci-fi being pushed into the background, is that it's harder to realize how ludicrous the setup really is.  No one's ever seen the other Earth before now because it's always been on the other side of the sun?  Right.

Take Shelter is actually a really good film built on acting performances, tension, cinematography, and mood. It's like Tinker, Tailor, Soldier, Spy, except it's good.  I can't believe I made it this far into this entry before I blatantly insulted something.  Take Shelter works in every way.  Michael Shannon's performance is phenomenal, as are those by his supporting cast.  It vividly conveys the unease of a man who has the lurking suspicion that his prophetic visions of disaster are a sign his mental health is deteriorating.  Regardless, the urgency in his efforts to protect his family is admirable.  The second act is a bit too long, and those seeking a traditional narrative should look elsewhere.  But for most fans of cinema, the only debate on the quality of the film will be how effective/relevant it is to each individual viewer.  It didn't make enough of an impact on me to land in my top ten, but I'm an irresponsible twenty-five-year-old.  It does earn my respect, nonetheless, and is one of many great films of 2011.

I'm going to leave off there, because it's eight in the morning and I should probably go to bed.  I might be back before the big list, but I hope this sated your need for poorly proofread, film insight for the time being.
Posted by Dear Filmmaker at 8:11 AM

Email ThisBlogThis!Share to TwitterShare to FacebookShare to Pinterest
Labels: interjections, worth seeing