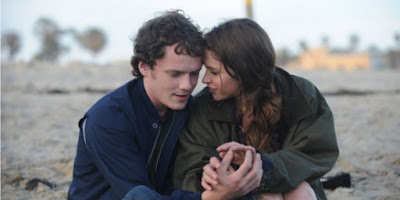 Last year, Ryan Gosling demonstrated that love and ukulele skills aren't always enough to sustain a relationship.  In 2009, Colin Firth showed us the absolute heartbreak of losing a lover.  We tend to get about one accurate relationship drama a year, and 2011's offering appears to be Like Crazy.

Like Crazy's accuracy on the highs and lows of young love, as well as the difficulty of long-distance relationships is hard to deny, and while the film's emotional instances serve up quite a few high points, they tend to get muddled in the simplicity of the film's composition, which serves as a detriment to the overall quality of the film.


Like Crazy begins in Los Angeles, and quickly speeds us through the courting process and deepening relationship between two college students, Jacob and Anna.  They're pretty cute, these college students.  They spend their time writing adorable little notes, reading aloud poetry, and of course; drawing pictures of furniture.  The furniture drawing can be attributed exclusively to Jacob, who fancies himself a furniture designer, and spends the entire film drawing the same chair over and over.  Spoiler alert: at the end of the film, he draws a couch.

More about the obnoxiously bland Jacob later.  The turning point in the film comes when Anna has to return to England because her student visa is expiring.  But of course, she can't live without Jacob for three months, so she lets her visa expire and stays in America.  When she does eventually return home, and subsequently attempts to come back to America, she is shocked to discover that she is not welcome back into the country because of her expired visa.  This is the first moment where the audience is inclined to hope for the couple's doom.  After all, if you don't know the basics of international travel, you probably aren't fit to be in a relationship.

So, instead of being stuck in England for three months, Anna gets stuck there for about three years, and the rest of the film takes place over the course of this period, usually highlighting the snippets of time in which Anna and Jacob's relationship take significant turns:  Jacob's trips to England, their lackluster attempts to make long distance work, some bickering, etc. etc.  These snippets leaves us without much of a traditional plot, the film seeming to exist in moments.  This, in theory, is fine, perhaps even admirable.  Unfortunately, it also fails to develop the characters beyond "boring boy" and "cute girl," and contains little reasoning as to why they belong together at all.

Obviously, Anna's failure to obtain a travel visa is the film's authoritative logic leading to the couple's disintegrating relationship.  But on the other hand, there are moments in which it's hard to believe that they actually want to be together.  Jacob sets up a furniture business in L.A. and this becomes his sole argument as to why he can't move to England to be with Anna.  Am I supposed to believe that he can't draw chairs in England?  Does England not have chairs?  Gorgeous English girls should always take priority over small furniture businesses.

Of course, Jacob and Anna date other people during their breaks, which is how all long-distance relationships work, whether the other person knows it or not.  And Jacob has no problem breaking up with an underutilized Jennifer Lawrence not once, but twice, in order to go back to Anna.  He apparently pines for Anna when we're not looking, because it's hardly articulated in the scenes we do see.  However, it is Anna's alternative significant other that wins the 'most contrived situation' award when he proposes to Anna in front of her parents.  People don't do that, no matter what movies tell you.  The scene is infuriating.

The best moments of the film are when the actors aren't talking, because even though Jacob is funny looking, he and Anna have onscreen chemistry when their mouths are shut.  It is the final scene that steals the show, and contains what will inevitably be the moment that stays with viewers the longest.  Anna finally makes it to America to reunite with Jacob for good, and through a well-crafted sequence, the audience realizes that the couple have missed their moment.

7/10 just because the highs are quite high.
Posted by Dear Filmmaker at 11:46 PM

Email ThisBlogThis!Share to TwitterShare to FacebookShare to Pinterest
Labels: cute fuzzy romance smashed to bits by a giant hammer, forgettable but solid, indie flicks, inevitable death of your relationship